Considering the fight against galamsey, it appears we are our own enemies. This is because the very people who are screaming that galamsey is destroying our water bodies are the very same people hidden carpet with heavy machines destroying our water bodies. Manasseh Azure Awuni said that Ghanaians should stop accusing the Chinese of illegal mining because the enemies of the galamsey fight are within.

During the stakeholder’s conference on illegal mining, The Asantehene, Otumfuo Osei Tutu II also said that “We cannot deceive ourselves with conferences upon conferences because about 30% of the people who are engaged in galamsey are the very people holding the conference here”. This suggested that politicians, chiefs, and top officials in government are the very people destroying our water bodies. 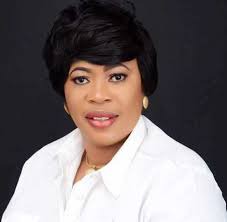 This incident took place yesterday, Sunday, 16th May 2021, where 8 excavators, a dozer, and dozens of water pumping machines belonging to Madam Kate Gyamfua were burnt down to ashes. The Military also seized guns used for providing security at the galamsey site. 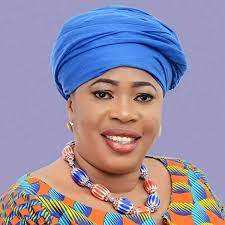 This propelled some Ghanaians to react that the burnt excavators are not enough. The women organizer must face court trial to serve as a deterrent to other officials in government destroying our water bodies with galamsey. Ghanaians argued that if President Nana Addo Dankwa Akufo-Addo really wants to eradicate galamsey completely, some of these officials in his government must be used as an example for others to know that he is extremely serious with the fight.

Check out comments from some Ghanaians: 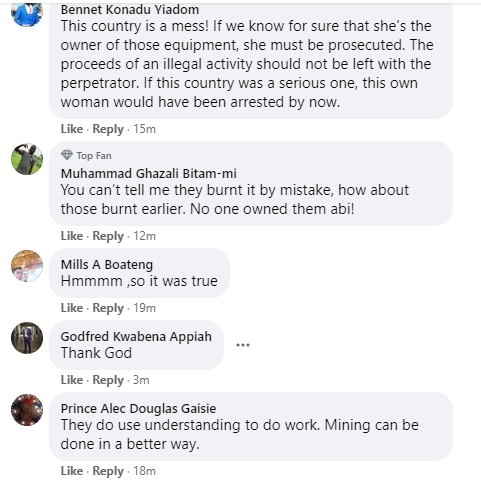 A Facebook user known as Bennet Konadu Yiadom said that “This country is a mess! If we know for sure that she is the owner of these types of equipment, she must be prosecuted. The proceeds of illegal mining activity should not be left with the perpetrator. If this country is a serious one, this woman would have been arrested by now”. 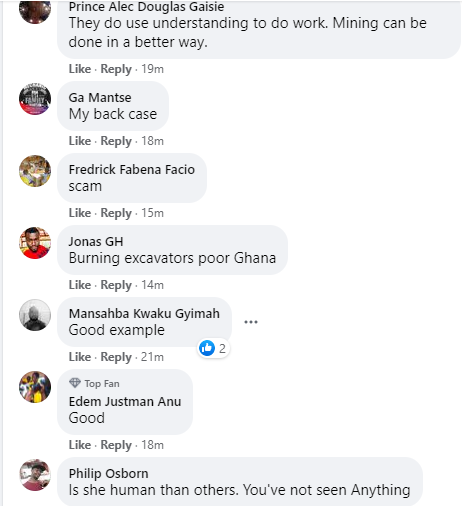 Another Facebook user known as Philip Osborn said that “Is she human than others, You have not seen anything”.

Another Video Of Two KTU Student K!ssing and Ch0pping Themselves On L0ver Bench [Watch Now]